So this gives us a rather complex picture of how the media is working and how much truth is actually possible behind the scenes… Clear that non of this is allowed to shit on the bosses heads!!! Wake up world! Start your activism with boycott and stop believing the lies brought to you on a daily base!
Love and Light  and keep shining people!!
Blessings and Hugs Edith

The ownership of the news media in the U.S. has been concentrated in the hands of just 6 incredibly powerful media corporations which control most of what we watch, hear and read every day. 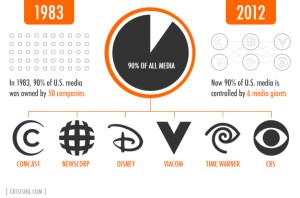 The 6 corporations that collectively control U.S. media today are Time Warner, Walt Disney, Viacom, Rupert Murdoch’s News Corp, CBS Corporation and NBC Universal. Internationally, there are also other players including Bertelsmann AG and Sony. They own
and many successful websites.
Although it seems many do not care about who controls their media, it greatly impacts their view of the world and major events in it.
The average American watches 153 hours of television a month.  Television is essentially proven to have an actual impact on your brain and thinking: they do not call it “programming” for no reason.

Fortunately, according to a poll released by Gallup last year, the majority of Americans (55%) still have little to no faith in the mainstream media, up slightly from 2012’s all-time high (60%). The increasing number and dedication of independent news, made possible by the internet, are shifting the paradigm.

List of the primary 6 corporations and what they own:
Time Warner

Checkout this effective graphic, designed by Jason at Frugal Dad, showing how almost all media comes from only six sources that originated from 50 companies back in 1983. Those companies controlled the vast majority of all news media in the United States in that time, and today, in much of the world! Also, keep in mind, a few changes have happened since this infographic was created, they are outlined at the bottom.

NOTE: This infographic was created in 2011 and is not factoring in some key transactions. GE is no longer the majority shareholder for NBC or Comcast, thus Comcast has become the 6th. Time Warner also doesn’t own the majority of AOL, so Huffington Post isn’t directly affiliated with them.

But the fact that very few companies own so much demonstrates the need for independent sources, and to some extent a crowd-sourcing of news. In the end, the responsibility falls on each of us to network, learn and inform others, and while doing so fact-check whatever we read or hear.

One comment on “These 6 Corporations Own Most Of The Media”

This site uses Akismet to reduce spam. Learn how your comment data is processed.